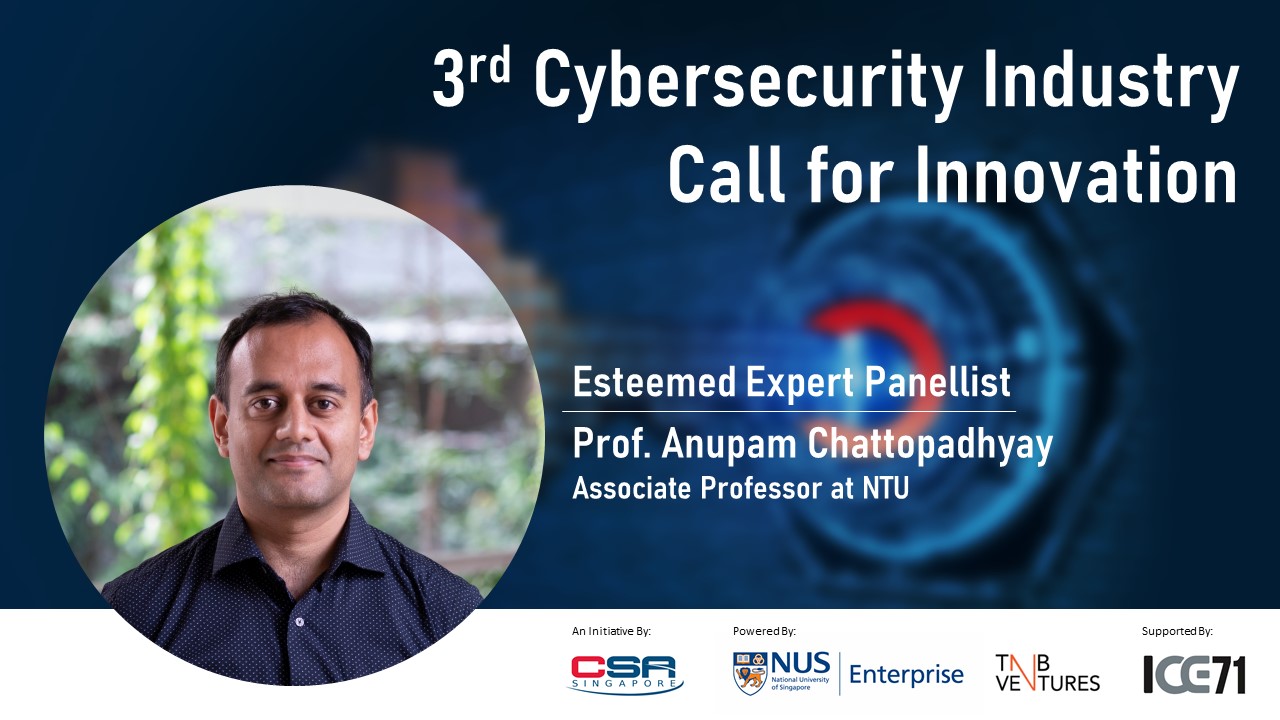 This post features Prof Anupam Chattopadhyay, who was among a stellar panel of experts called on to contribute their technical knowledge to the 2021 Cybersecurity Industry Call for Innovation, an initiative by the Cyber Security Agency of Singapore. He is currently an Associate Professor at Nanyang Technological University (NTU), Singapore.

The call attracts cybersecurity innovators with clever solutions to address challenges laid out by participating end-users. To remove cost as a barrier to innovation, CSA awards up to S$1M for the co-development of promising projects.

Imperative to call’s success, the expert panel provides advice on the technical novelty and suitability of submitted proposals. For their contributions in pushing the frontiers of cybersecurity innovation, we thank Prof Anupam and fellow expert panellists!

Read on to learn more about Prof Anupam Chattopadhyay and why he’s doing this.

Over the years, you have made many notable contributions in pushing the frontiers of cybersecurity. What do you consider your greatest achievement?

Together with my students and collaborators, we have been able to identify critical flaws in multiple cryptographic implementations; improved the hardware implementation efficiency of security protocols, demonstrated vulnerabilities in commercial consumer devices and enabled technology transfer through spinoffs – all of which are notable developments. Yet, to single out one contribution, I will pick the advanced undergraduate course on cyber-physical system security that I introduced, supported with practical experiments. Students did enjoy the course, got trained with state-of-the-art knowledge in cybersecurity, and many of them eventually chose Cyber Security as their career path.

What is one unexpected thing that people don’t know about you?

I like to cook elaborate dishes, naturally my forte being Asian cuisine.

Which emerging cybersecurity technologies are you most excited for?

Post-Quantum Cryptography. This is a field that will initiate massive change in the implementations of many major protocol implementations, requiring us to understand the fine nuances of performance issues associated with the migration.

As part of the Technical Panel for the CyberCall, you played an indispensable role in evaluating proposals for quality and innovation. Are there any areas that you would like to see more innovation in? How can start-ups leverage these opportunities?

I liked the huge interest about the CyberCall proposals and was glad to evaluate proposals with a diverse range of applications and very practical real-world implications such as, maritime, manufacturing, healthcare and urban transportation. In my humble opinion, security is a two-sided coin, where designers and white-hat attackers both play equally important role. I would like to see more innovation in the area of security testing/verification, especially for complex systems with a lot of legacy protocols. Eventually, these studies pave the way for standardized security checks.

Why should companies join the CyberCall?

Cyber Security research is now open with many frontiers, requiring a deep study, collaborative effort and steady stream of technology transfers. Through the CyberCall initiative, companies can identify the critical security issues, pair up with leading researchers and apply a mature technology to solve it. It is clearly a win-win with long-term positive implications in society.

> Learn how you can leverage opportunities in the CyberCall here. 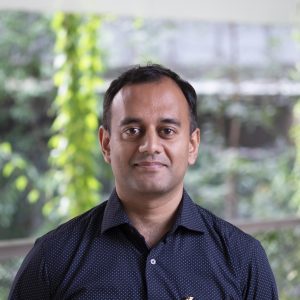 Anupam Chattopadhyay received his B.E. degree from Jadavpur University, India, MSc. from ALaRI, Switzerland and PhD from RWTH Aachen in 2000, 2002 and 2008 respectively. From 2008 to 2009, he worked as a Member of Consulting Staff in CoWare R&D, Noida, India. From 2010 to 2014, he led the MPSoC Architectures Research Group in RWTH Aachen, Germany as a Junior Professor. Since September, 2014, he is appointed as an Assistant Professor in SCSE, NTU and also holds an honorary adjunct appointment at SPMS, NTU. In the past, he was visiting Professor at Politecnico di Torino, Italy; EPFL, Switzerland and Indian Statistical Institute, Kolkata. During his doctoral studies, he worked on automatic RTL generation from the processor description language LISA, which led to a spin-off, and subsequently was acquired by a leading EDA vendor. He developed novel high-level optimisations, verification techniques, and proposed a language-based modelling, exploration and design framework for partially re-configurable processors – many of which resulted in successful technology transfers to the EDA and Semiconductor IP industry. Anupam currently heads a team of 20+ researchers, overseeing projects in the area of cyber security, computer architectures, design automation and emerging technologies. His research advances has been reported in more than 200 conference/journal papers (ACM/IEEE/Springer), multiple research monographs and edited books (CRC, Springer). Anupam’s research in the area of emerging technologies has been covered by major news outlets across the world, including Asian Scientist, Straits Times and The Economist. He is a series editor of Springer book series on Computer Architecture and Design Methodologies. Anupam received Borcher’s plaque from RWTH Aachen, Germany for outstanding doctoral dissertation in 2008, nomination for the best IP award in the ACM/IEEE DATE Conference 2016 and nomination for the best paper award in the International Conference on VLSI Design 2018 and 2020. Anupam is a distinguished lecturer of IEEE CEDA, senior member of ACM, senior member of IEEE and fellow of Intercontinental Academia.